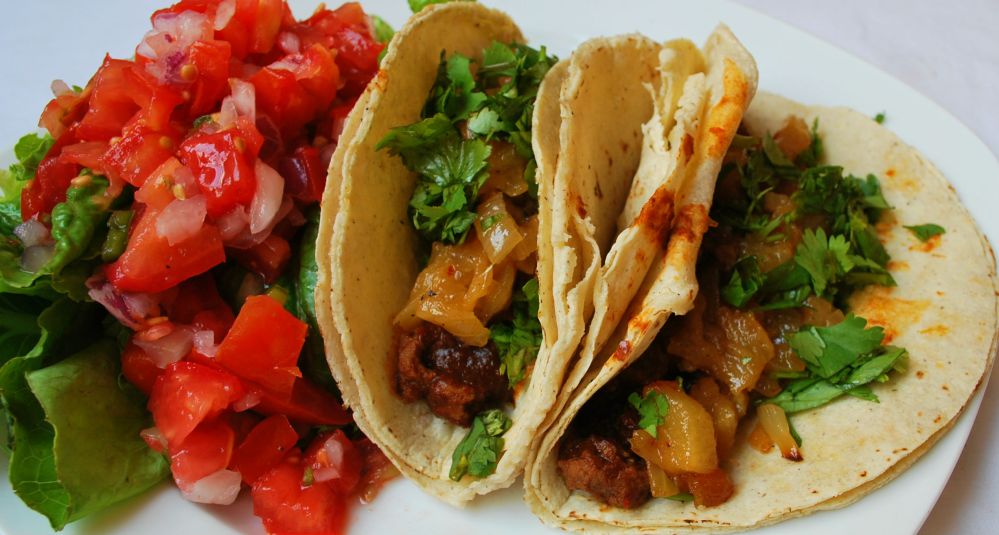 Certain things have been hard to let go of as someone who is for all intents and purposes, vegan.  Especially tacos.  I take that back, especially Tacos Al Pastor.

Tacos al Pastor are a traditional Mexican style of taco whose origin stems from Lebanese cuisine.  Literally, Tacos Al Pastor means Tacos in the style of the shepard, most probably due to the fact that many of the Arab immigrants in Mexico were shepherds and herders back home. Fleeing the increasing pressures of the Ottoman regime, thousands of Lebanese immigrants settled in Mexico at the end of the 19th and beginning of the 20th centuries.  Their influence is apparent in many aspects of Mexican cuisine and certain regions of the country, but perhaps no other dish is as widely popular, or delicious as Tacos Al Pastor.  Here’s a great article outlining the history of Lebanese cuisine in Mexico.

Thick slabs of pineapple are assembled atop a stack of meat marinated in a deep, rich mix of vinegar, chili peppers, and spices and slowly grilled on a gyro-like vertical spit.  The mix of sweet and savory is insanely good, especially when cradled in a bed of warm corn tortillas and peppered with more pineapple, cilantro, and lime. Excusez-moi,  as I wipe away the drool….

So, me thinks, there has got to be a way to vegan-ize it and loh and behold, many a vegan has been making Tacos Al Pastor with texturized soy protein for years.  The other day, I threw together my own version of the recipe (many people guard the secrets to their Al Pastor recipe for fear of replication) and these puppies came out deliciously.

A note on measurements: I still don’t have any measuring cups or spoons (!), so all quantities are estimates.  Test your sauces per your gusto as you go along! 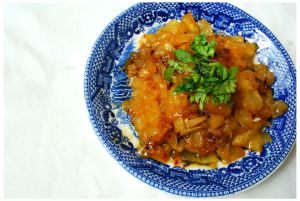 juice of one lemon

To prepare salsa: Combine ingredients in small saucepan and simmer on low until onions and pineapple brown, become aromatic, and taste unreal. Set aside.

2 C textured soy protein, dry. (Follow directions on package to rehydrate. I rehydrate in hot water with a garlic clove)

Cut off stems and shake out seeds of chiles, then rehydrate in half of veggie broth on stove.  I actually used reserved broth from making pinto beans the night before (garlic was the only ingredient added to beans besides water) instead of vegetable stock, but anything in addition to water will yield a more flavorful sauce. Meanwhile, in another pan, start to sauté onions and garlic on medium heat until soft and translucent.  Once rehydrated (about 10 minutes), remove chiles from their rehydration bath, making sure to reserve liquid.  Once they have cooled enough, remove extra pith and seeds from peppers.  Grind to a paste with a mortar and pestle or with a food processer if available.

Return paste and reserved liquid to pan with onions and garlic.  Add remaining vegetable broth, vinegar, and spices and simmer until sauce reduces.  Flavors develop throughout the cooking process, so save your salt until the end.  Add soy protein and simmer again for another 30 minutes- 1 hour.  This is a faster version, that will have you eating quickly, but the longer the sauce simmers, the deeper the flavors.