Who doesn’t love cereal and milk in the morning?.  But the problem with a lot of brands is that they’re often hiding white sugar and vegetable oil within.  Those are two things I don’t want in my morning routine.  What do I want? I want crunchy, crispy, chewy, grainy, slightly sweet, and filling.  I want long lasting energy to power through 8am ESL classes and then through a gruesome mid-morning Insanity workout.  I want the kind of nutrition that will have my muscles and bones singing my praises.  I also want nutritious and subtly flavored milk for my cereal to swim and delight in.

At the heart of this recipe is amaranth and chia: two Mexican grain powerhouses to send you off on the best foot.  And instead of regular old vegetable oil? Coconut oil is added for a boost of the right kind of fat to give the ol’ metabolism a kick in the pants.  I used cocoa powder in this round, but I’ve used peanut butter in its place on another occasion and that was crazy delicious as well. Together, their flavor is probably explosive! The possibilities are endless with this one, so have fun, and savor every crunchy bite.  And don’t forget the Cinnamon Soy Milk! More below.

A Note on Amaranth

Amaranth is another ancient grain and foodstuff staple of the Mayans, Incas, and Aztecs in Mexico and Central and South America, and is a nutritional BADASS. It is one of the most complete plant based products, and is an important source of protein, calcium, Vitamins A, B, C, B1, B2 and B3, folic acid, iron, phosphorous, magnesium, and manganese.  In addition, amaranth is completely gluten-free and contains high levels of the essential amino acid, lysine, which is responsible for the synthesis of all proteins, the absorption of calcium and production of antibodies in the human body.  I could go on for days… but you get the idea. Amaranth is a truly amazing grain.  (Source: amaranto.com.mx)

This recipe calls for “popped” or “puffed” amaranth.  If you can’t find popped amaranth, you can easily prepare it at home just like popcorn.  When popped, amaranth is extremely light and has a slightly sweet taste.

Preheat oven to 350 degrees.  In a large and lipped baking pan, place amaranth, oats, chia, and flax and loosely mix.  Lightly toast until golden brown for about 15 minutes (mixing around with a spatula every 5 minutes to prevent burning).  This is how long it took me, but I have a very feisty oven, so check on your grains often so they don’t turn black on you.   While your grains are toasting, you can get to work on the Cinnamon Soy Milk.

Normally I keep both premixed soy and a carafe of my own powdered soy milk in the fridge.  Prepackaged soy milk indeed tastes better than its powdered counterparts, but for eating cereal or using in recipes, I prefer to use the powdered preparation.  Why? Well, it’s cheaper, easier to lug around, involves way less packaging, lasts much longer, and contains the same nutrition as the prepared brands.  For this recipe it functions perfectly and you won’t notice the difference for a second.  If you don’t want to go out and buy a bunch of powdered soymilk, throw some cinnamon sticks in your soymilk and let them soak away.

To coax the flavor out of the cinnamon sticks, break the sticks in the water, cover (I forgot that step and woops… half of my water evaporated away!) and simmer for 15 minutes.   Reserve about ¼ Cup of cinnamon water. Then combine in a carafe or pitcher with the soy milk powder, cover, and cool in the fridge.  You may want to add a touch of honey or agave if you like your milk with a little sweet… either way it’s delish!

Now, back to the cereal! Set your toasted gems aside, but don’t turn off the oven just yet.  In a small bowl, combine coconut oil, cocoa powder, agave nectar, salt, and reserved cinnamon water.  Drizzle over grains in a large bowl and mix until well incorporated.  Place back in oven for another 10 minutes, stirring frequently.  Remove from oven (you can turn it off now!).  Once the mix is cooled, add the 2 cups (or more if you like) of corn flakes and store in airtight container.  That’s it! 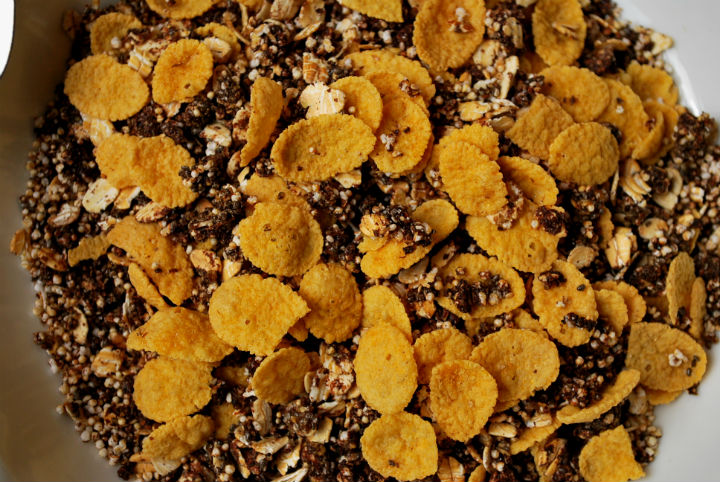